Belated Christmas Greetings to All & update

Belated Christmas Greetings to All.

Thought I'd give you a quick update on what's been happening here. Firstly, we are starting to be able to see the ground again after 2 weeks with about 3ft of snow & seriously subzero temps (-15 C etc) so that is great. We even had an official white Christmas - like we need any more LOL!

I want to show you what my wee boy got me for Christmas (with a wee bit of helpful pointing in the right direction from Mummy, that is).

Isn't it just stunning - the photos show either side of it. It is the Maacki Chinensis wood that Sally spoke about some time ago here & I sent her down a 0.6mm crochet hook rather than the one that comes as standard - I can't describe just how lovely it is, the photos really don't do it justice. 'Im-in-the-garage has really surpassed himself this time - Thank you so much.

The other stuff I have been doing is Miranda's Ice Crystal in 2 colours but you are not going to see it as the DYK sections are truly appalling and it shames what is a stunning pattern. I have also done Miranda's Angels in the Snow that I won from the very kind giveaway of the anonymous donor but I can't find the image at present so will update you later - again a gorgeous pattern.

Our GP is retiring unfortunately as he has gone over and above the call of duty on a number of occasions over many years so I thought he warranted a couple of gifts - a bottle of whisky &.....

This is Jane's Double Self Closing Mock Ring Bookmark but my choice of thread was not the best - it is a variegated blue and a mint green but unfortunately the mint green & the pale blue are hard to distinguish apart but apart from that I really like it.

Can't think of much else at present except hope you all have a safe & prosperous New Year. We are going to my Aunt's for Hogmanay which will be bittersweet as it will be the first without my uncle but hopefully she'll cope okay.

This is going to be fairly graphic rather than wordy I think - I have a bit to show you all.

Firstly, I had the cheek sometime ago to ask Miranda if she had a pattern for Ice Crystal that stunning snowflake she first showed here. She very kindly gave it to me & asked if I would test tat it for her. I thought orginally (& still do) that this was one of the most realistic true-to-life tatted snowflakes I had ever seen and as such thought that I really had to tat it in white just to show the stunning simplicity & complexity mixed together (like a real snowflake is) if that makes sense.
I really loved tatting it but as Miranda says herself on the instructions it is not for the faint-hearted. 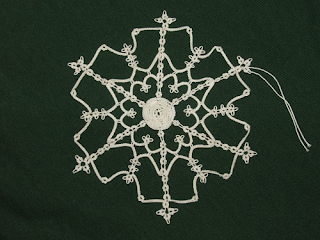 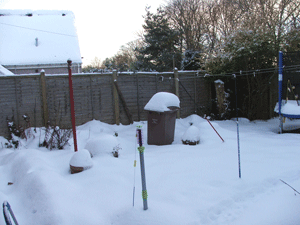 the back of the house 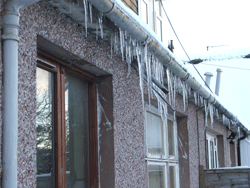 the side of the house

these each are about 6-8ft long and as thick as your arm! 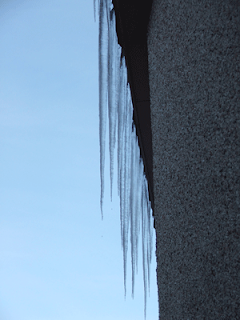 The updates I need to do are AnneB's dragonwing doily done in a HDT that I got from etsy but it is supposed to be #30 rayon but tats more like #60 - #80 and is a bit fuzzy but I adore the colours and it just shows what 2 different backgrounds can do. 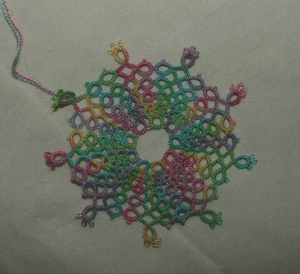 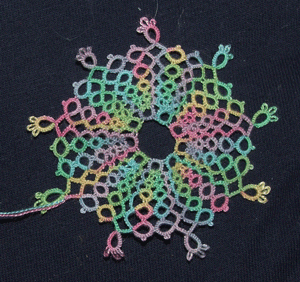 Then I adapted AnneB & Debbie's seahorse dragon to make a bookmark (in Lizbeth Jelly Bean) for one of DS's classmates Mum as she was so kind to take him to school when I couldn't drive. 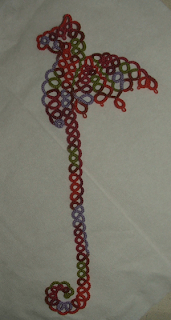 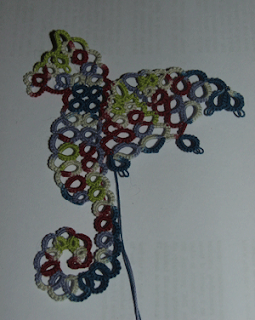 The bookmark recipient was then going to frame him so I said I'd do a proper one for her so we got this one in Lizbeth Caribbean. 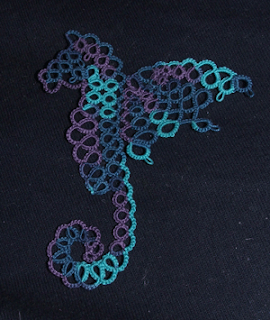 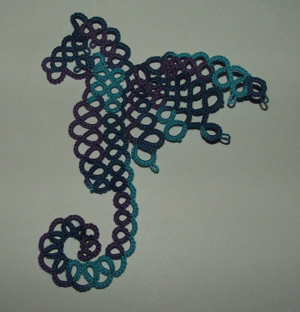 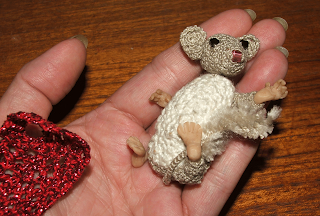 Great Creatures with a stunning giveaway

I have a special affection for these stunning creations as they are from Tassie like me. Have a look round Linda's blog & her website & you'll understand what I mean about stunning. She is also having a giveaway if anyone is interested

managed to get out of the house to get the camera fixed - been very difficult as we have over 1m of snow (for those across the pond 3+ ft)and the schools have been closed. Combine this with an expected low of -14C tonight (or 6.8 F apparently) and -25C (-13 F) forecast 20 miles up the road it has been an akward few days as you can imagine.

"Christmas comes but once a year!" 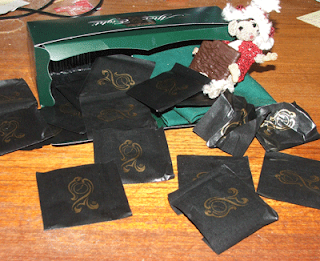 He's got such a fat tummy (partly hidden by the last After Eight chocolate) because he has just gorged himself on the entire box LOL.


He is made entirely of chains and whilst making him I happened upon an interesting discovery - if you tat a single double stitch then do a shuttle join to chain below & over and over again it ends up looking nothing like tatting but is very dense, holds it shape and almost looks a wee bit like crochet but not quite. I called it "brick stitch" as each shuttle join is in the slight gap made by the shuttle join on row below so you end up with a slightly staggered effect a bit like a wall. His paws are made of Sculpey but the rest of him really is tatting!!

This is his first head which I lost.........much to my annoyance 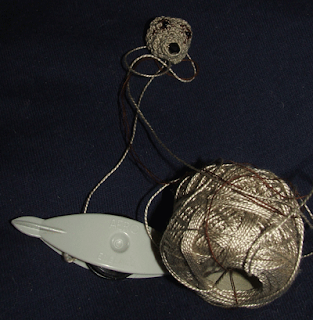 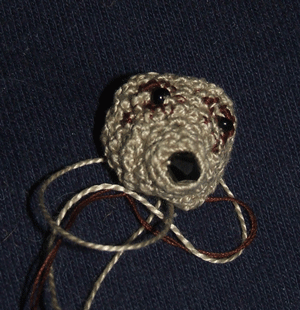 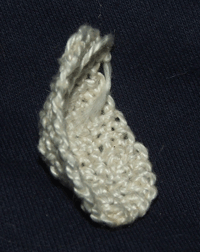 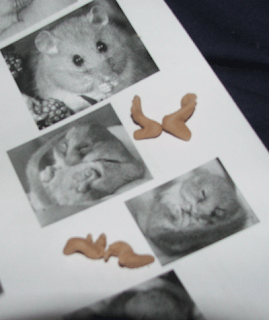 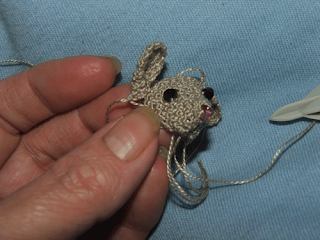 & then various other shots 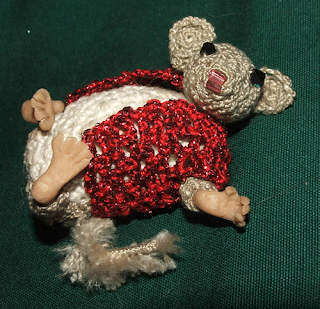 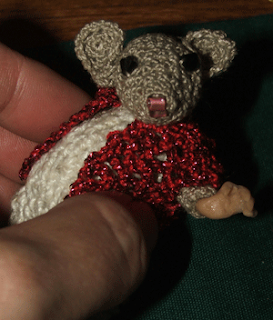 PS He's got a furry tail cos he's a dormouse lol.

THANK YOU ALL & Swap anyone?

THANK YOU ALL who commented on my previous post - it is VERY greatly appreciated - I am not going to publish your comments but have taken the responses to heart - THANKS.

Anyone want to do a very quick Christmas swap? What with everything going on with my eye I never signed up for any of the Secret Santa's & christmas swaps with the various groups and I'm really missing it.
It would need to be done quickly as we are rapidly approaching the cut-off dates for overseas mail.
I had an idea for a shuttle, thread, few beads, maybe a pattern & a small tatted item but anything goes would be fine too.
Please let me know ASAP

PS My choccie box entry should be up and running tomorrow once I get hold of a camera that works LOL.

UPDATE: Thank you for responding to my request - I have 3 swap partners so that probably will be enough unless someone is really desperate

My signature doesn't appear to be working :(
Posted by Trayna at 00:16 No comments: