One of my abiding memories of my childhood is being woken by my cousin Bruce taking great delight in saying "Your bridge has fallen down!". We, Mum and I, were in Scotland over Christmas to sort out some things after my Grandpa died. Dad stayed in Tassie as by that stage he was unable to make the long journey to Scotland. Bruce had been babysitting as Mum was out with my uncle & aunt "first-footing" some other relation. Once Mum was back, I remember the concern that we were unable to contact Dad and had no knowledge if he was involved. At that time, telephoning internationally was "hit and miss" most of the time and it took hours (with concern escalating to mild panic in Mum and just full-blown terror on my behalf) to be finally able to get a line through to Dad and ascertain that he had not been anywhere near the bridge and was fine.

To explain, Hobart, the capital of the Australian island state of Tasmania, is situated on the banks of the River Derwent. Due to the geography of the area with Mount Wellington stopping expansion to the west, Hobart developed on both sides of the Derwent - the main city centre is on the western shore. The River Derwent at Hobart is nearly a mile wide.

The Tasman Bridge was a concrete span bridge with 21 support piers - the shipping channel was between piers 14 - 15.


On the evening of 5th January 1975 the bulk ore carrier, Lake Illawarra, was travelling up the Derwent towards the bridge. For many reasons, too complex to go into here, she (the Lake Illawarra) was approaching the bridge at the wrong point. At 9.27pm on that Sunday night she hit the Tasman Bridge causing piers 18 & 19 to collapse bringing the concrete spans above down. 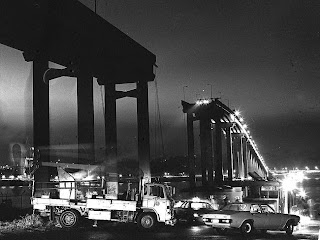 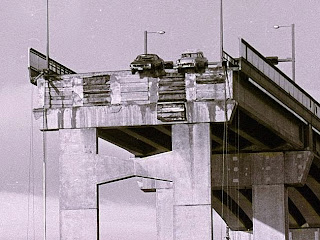 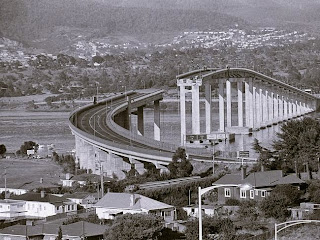 12 people died - 7 crew from the Lake Illawarra and 5 motorists that were driving across at the time when their 4 cars plunged off the gap. This was just the start of the disaster however. The Tasman Bridge was completed in 1964 and at the time of the disaster was the only crossing of the Derwent at Hobart. Bridgewater Bridge crosses the Derwent about 25km (~15.5 miles) to the north of Hobart and was the only other crossing anywhere close to Hobart. So, Hobart was literally split in two - what had been a 5 - 10 minute journey from west to east or vice versa now involved a 50+ km journey taking 90+ minutes on roads that weren't designed to cope with anywhere near the volume of traffic that was now having to use them.

I vividly remember the journey back from the airport when we arrived back in Tassie - the airport is on the eastern side of the Derwent some distance away and we lived on the western shore in one of the southern suburbs. As I mentioned earlier, Dad was unwell and the added stress of a 2hr car journey to get to pick us up had not helped. To try and cope with the extra traffic some of the roads to Bridgewater/Granton had been re-surfaced in the previous few days and the day we arrived was hot. This meant that the newy laid tar was melting partially and when Dad drove round a particular bend the car slid in the tar and went straight crashing up a bank on the edge of the road. Mum got a bad seatbelt burn to her chest, Dad's chest impacted the steering wheel and I got jammed between the two front seats as cars did not have rear seat belts at that time. But luckily, no-one was really injured and the car was drivable. A consequence, however, was that Dad was admitted to the hospital 2 days later as the stress of the journey and the impact of the steering wheel had exacerbated his asthma & emphysema.

In fact, looking back on it now it was the trip from hell - Cyclone Tracey hits Darwin on Christmas Day 1974; the bridge collapses 5th Jan 1975; airborne en route from Singapore to Sydney we encountered the tail end of another cyclone resulting in (literally) the entire planeload of passengers AND crew being violently ill due to unimaginable turbulence; car crash on way home and just the "cherry on top" my Daddy in hospital!! And to cap it off one of my best friends left school as she lived on the Eastern Shore and the commute made it extremely difficult.

What a time that was! It was a very interesting story and well written. Great job of explaining to those of us who know so little of the area. Thanks for sharing.